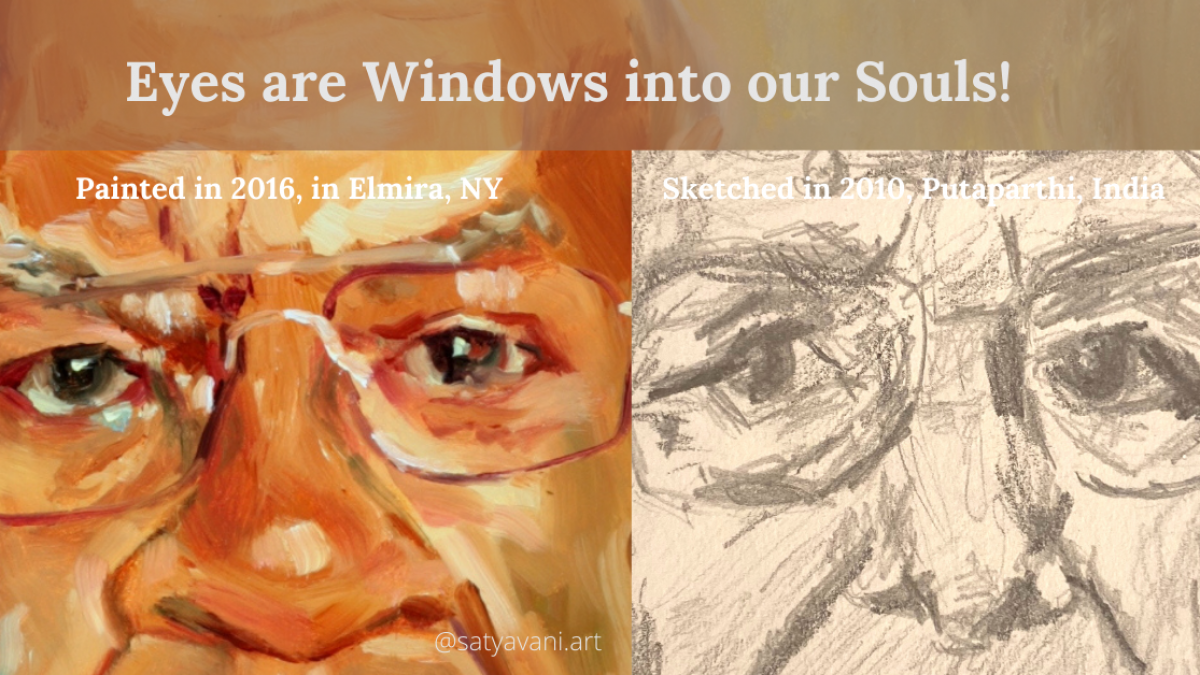 It was just a regular painting day in the US till...it turned into a moment of realization and deepened my bond with my grandmother far away in India.

It was painful watching him.  I felt guilty.  I didn’t know he had steel rods in his hips and knees and that climbing stairs was painful.  I offered to help him or move my setup downstairs.  He shrugged it off.  “I can do this” he said proudly.  As he settled down in the chair, I asked him why he was interested in getting his portrait done.  “It makes me feel important”, he smiled.  “You are important” I replied.  “You are the reason we have these vibrant jazz performances in Elmira”.  He smiled with a hint of pride.  Howard Coleman was the owner of “Green Pastures”, a Jazz and Blues club that was in Elmira.  For ages it had opened doors to many young talented players in the community by exposing them to reputed players from New York city.

As I painted him, we talked, about racial segregation and discrimination, his family, his switch of loyalty from republican to democrat when Obama was contesting.  He was a lovely conversationalist and he seemed to forgot that he was actually in pain as he modelled.  Through all this talk and laughter there was a familiar feeling I saw in his eyes.  My mind was racing to match that feeling to my memory bank and then suddenly it dawned on me!  He had the same look that my paternal grandmother had in her eyes.  A slightly guarded look, a little disbelief that questioned the authenticity of the person he was conversing with, me.  It was a little unsettling.   I pride myself as an honest person so it hurt, till the stories he told flashed before my eyes.  It dawned on me that it wasn’t about me.  He had been betrayed by life way too often. He was protecting himself.

My grandmother was married into an affluent zamindar communist family in a newly democratic India.  As a young bride she had to watch as the male members lived their new found philosophy of equality in society and distributed ancestral wealth without any strategy in place for her security and the mayhem that ensued in her life.  Meanwhile she also had to witness the government declare all communists as Naxalites and give “shoot at sight orders” for the male members of her family and their friends.  She trusted no-one. Through all the smiles her mouth expressed, her eyes couldn’t lie. Long after the dust settled, she was still guarded with everyone, even me, her granddaughter.  In that one moment I saw a deep connection between an African American man in the United States of America and an Indian woman in a small town in India who never met.  They both had nothing in common externally but their eyes reflected their hearts.  They told the same human story of betrayal and vulnerability.

Painting Howard helped me understand my grandmother better and it improved my relationship with her.  It reinforced the reason why I love painting portraits.  Portraits are about connections!  However, I wasn't always able to connect like this to art, to the world or to myself.

It was only when I changed my agenda of having a finished product every time I painted that I started noticing these cross connections.  You see like most of us, I'm genuinely interested in people and their stories. I let my models talk and try to listen carefully.  I'm open about my vulnerabilities as an artist and sometimes somewhere in there masks fall off for both of us and connections happen.  I had also built my skill level to capture what I'm seeing!  but there is always that one thing that eludes me and the journey is never done.

Check this out if you'd like to build your skills of capturing likeness in portraits.